Serving as a military chaplain deployed to a war zone is essentially the same as serving as a pastor of a parish in Kentucky, said Father Benedict “Ben” Brown on Memorial Day.

“But the setting was quite different,” he told hundreds of listeners gathered at Patriots Peace Memorial on River Road May 30.

The gathering honored all those who have made the supreme sacrifice in service to the United States and recognized two servicemen who died in 2021.

Two glass plates were added to the memorial in the names of 1st Lieutenant Scot Wayne Ames Jr., U.S. Air force, and Lance Corporal Kenneth D. Robertson, U.S. Marine Corps. The memorial, which was erected 20 years ago this year, now bears the names of 459 service women and men from the region.

Father Brown acknowledged the sacrifice of Ames and Robertson as well as that of their families in attendance.

He went on to explain how he ministered to Marines and sailors in the field during his years as a U.S. Navy Chaplain. Father Brown was a commander in the Chaplain Corps with active duty service attached to the U.S. Marine Corps at Camp Pendleton; Camp Lejeune, N.C.; and foreign combat deployments. He earned a Bronze Star Medal for service in the war in Iraq.

Photo by Marnie McAllister for The Record

Visiting Marines at checkpoints in Fallujah, he said, “I’d ask them, ‘Do you know why you’re out here? What you’re doing is going to cause (the writers of history) to write that the second battle of Fallujah is going to take longer because of what you’re doing. You’re making a difference.’ “

Father Brown said he also baptized in the field.

“I would typically have two Marines or sailors there in flak jackets, kevlar and so on,” he said. “I’d take the canteen, say the words of blessings and pour the ritual water.”

Before he did that, though, he sang them a Garth Brooks song – “I Will Sail My Vessel.”

The final verse of the song goes like this:

“There’s bound to be rough waters
And I know I’ll take some falls
But with the good Lord, as my captain
I can make it through them all, yes
I will sail my vessel
Til the water runs dry
Like a bird upon the wind
These waters are my sky.”

Father Brown sang the song for his listeners at the Memorial Day ceremony and accompanied himself on guitar. There were more than a few tears shed in the crowd.

Following his speech, the families of Ames and Robertson were presented with the glass plates for enshrinement at the memorial. The Marine Corps League, Kentuckiana Detachment 729, presented a 21-gun Salute in their honor.

The 459 souls enshrined at the Patriots Peace Memorial are represented by personalized glass plates that replace a concrete brick in the memorial when installed. The memorial is lit at night, illuminating the glass plates.

Photo by Marnie McAllister for The Record

Members of the Marine Corps League Color Guard participated in a Memorial Day celebration May 30 at the Patriots Peace Memorial on River Road.
Members of the league presented a 21-gun Salute and played Taps as two men who died in service to the country in 2021 were enshrined at the memorial. 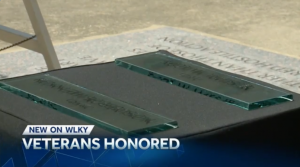 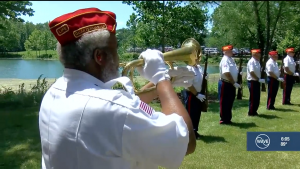 Robertson to be Enshrined at Patriots Peace Memorial